“Queen Victoria always had a fascination for her black and colonial subjects at a time when such interest was rare among the white aristocracy. She readily took up the cause of a ‘Dahoman captive’, affectionately calling her Sally, and becoming a loyal friend and protector until she was old enough to marry..”

In its Christmas Special for December 2017 the ITV series Victoria featured the story of Sarah Forbes Bonetta, a captive African princess who was brought to the court of Queen Victoria. She has frequently been described as the ‘Queen’s god daughter’ but this is not in fact true; nor, as has been suggested, did the queen ever bring her to live with the royal family at Windsor or any other royal residence. Here is the true story, but more is still being uncovered:

In 1850 Queen Victoria took to her heart and sponsored a chieftain’s daughter from the Egbado tribe, who had been saved from being sacrificed by a rival tribe in the West African kingdom of Dahomey. Her rescuer was a British naval officer, Commander Frederick Forbes, who had been sent as British envoy to King Guezo of the West African kingdom of Dahomey, during a bout of British gunboat diplomacy designed to induce the king to abandon the slave trade, something that Guezo was reluctant to do, for slavery accounted for his principal revenue.  Guezo, said to have 18,000 wives as well as a personal bodyguard of 8,000 Amazons – who were also used in hunting for slaves – was notorious for his penchant for ceremonial human sacrifice, which he often laid on for visiting foreigners. Many of these victims were slaves or captives from the higher born of the rival tribes, chosen for their nobility or royal tribal lineage. On visiting King Guezo, Forbes somehow managed to persuade the king to spare the 7-year-old girl who was about to be sacrificed for his entertainment, and make a gift of her to Queen Victoria instead – as a present ‘from a Black King to a White Queen’. He brought her back to England, on his boat the HMS Bonetta, giving her the name Sarah Forbes Bonetta (her real African name is thought to have been Aina.)

Queen Victoria always had a fascination for her black and colonial subjects at a time when such interest was rare among the white aristocracy. She readily took up the cause of the poor little ‘Dahoman captive’, affectionately calling her Sally, and becoming a loyal friend and protector until she was old enough to marry. Sarah was first invited to visit the queen at Windsor Castle in November 1850, when she impressed the queen by being ‘sharp & intelligent’. Victoria commissioned the photographer John Mayall to take her photograph (which is in the Royal Archives). For about a year after her arrival in England, Sarah lived with the Forbes family. Captain Forbes was astonished at her progress: ‘She is a perfect genius; she now speaks English well, and has a great talent for music. […] She is far in advance of any white child of her age, in aptness of learning, and strength of mind and affection.’

During this first year in England Sarah visited the queen and royal children at Windsor on several occasions, becoming particularly attached to the queen’s second daughter, Princess Alice. But when she was about eight, and apparently suffering from a persistent cough, she was sent back to Africa in May 1851 to attend a mission school in Sierra Leone, (the queen thinking the damp English climate was harmful to her health).

Frederick Forbes published an account of his mission – Dahomey and the Dahomans that same year but he did not live long enough to see the girl he had rescued grow up into a cultured English ‘lady’. He died, aged 34, at sea on board the HMS Tortoise on 4 June 1852, on his way to St Helena, ‘for the benefit of his health’ – which had been wrecked by fever and dysentery caught during his time in West Africa. In Africa, Sarah’s education continued to be paid for by the queen, with whom she corresponded and from whom she received regular gifts of games, toys and books. But Sarah was very unhappy and in September 1855 the queen commanded her return to England (Sarah probably having told Victoria of her unhappiness in a letter). When Sarah went to Windsor upon her return in December, Victoria recorded in her journal: ‘Saw Sally Forbes, the negro girl whom I have had educated: she is immensely grown and has a lovely figure’.

Sarah Forbes Bonetta was, inevitably the object of considerable curiosity in England and was admired for her considerable intelligence and the rapidity with which she learned English. After her return from Africa, she lived a relatively comfortable life with the Reverend James Frederick Schoen of the Church Missionary Society, and his wife, in Gillingham, Kent. But then – much against her wishes – Sarah was transferred to the care of a Miss Welsh in Brighton on the Sussex coast, who had been specially chosen by the queen to oversee Sarah’s introduction into British society. In January 1858, as a mark of the high regard in which Victoria held Sarah, she invited her to attend the wedding ceremony of her eldest daughter, Victoria the Princess Royal.

But as Sarah grew older the queen’s thoughts inevitably turned to seeing her suitable married. In August 1862, the year her friend Princess Alice fulfilled her duty and married a European prince, Louis of Hesse, Sarah too reluctantly submitted to the inevitable and married a West African businessman, a widower, Mr James Pinson Labulo Davies. Their wedding, officiated by the Bishop of Sierra Leone, caused something of a stir; Sarah had 16 bridesmaids of whom four were black and the newspapers were full of detailed accounts of the ceremony. Queen Victoria also commissioned her favourite court photographer Camille Silvy to take the couple’s portraits for her own photograph albums. Soon afterward Sarah and her husband returned to Africa, settling in Freetown. 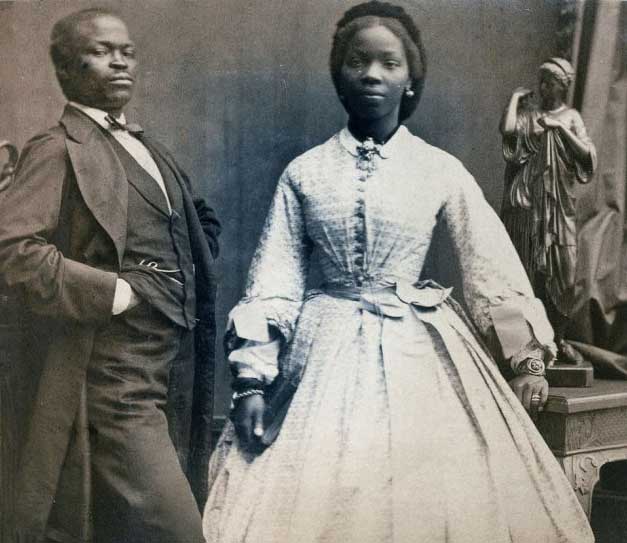 Sarah named her first child, a daughter, after the Queen, who agreed to be the child’s godmother and presented baby Victoria with a gold cup, salver, knife, fork and spoon – all in gold, the cup and salver inscribed ‘To Victoria Davies, from her godmother, Victoria, Queen of Great Britain and Ireland, 1863’. She had two other children: Arthur (1871) and Stella (1873).
In December 1867 during a visit to England, Sarah had seen the queen for the last time, at Windsor. Victoria again recorded the event in her journal: ‘saw Sally, now Mrs. Davies & her dear little child, far blacker than herself, called Victoria & aged 4, a lively intelligent child, with big melancholy eyes’. Sarah was, however, now sick with tuberculosis and went to Madeira for her health, where she died in 1880 at the age of about 37. The queen heard the news on the very day she was expecting a visit from her godchild Victoria, to whom she offered her maternal comfort, later resolving in her journal ‘I shall give her an annuity’. Queen Victoria held true to her word as godmother to Victoria Davies, and paid for her education at Cheltenham Ladies College during 1881–3. Victoria remained in touch with the queen for many years after her marriage. She had two children, Jack and Beatrice and their descendants still live in Lagos today.